Folders inside folders on top of folders – Organizing your Reaper project.

Note on my system: For this demo I used Reaper 6.42 with Voiceover on Mac running Big Sur.

What are folders anyways?

A folder in Reaper is a track that can contain other tracks. It really is that simple. A folder may contain a number of backing vocals for example. Their audio is routed through the folder to where you need it to go. Add a plugin to the folder and all those tracks are being effected by that plugin. Turn up the volume on the folder and all those tracks get louder. Pan it to the left and… you guessed it, all those tracks pan to the left. Pretty nifty isn’t it? 😀
In other programs something like this might be called a bus, or a sub-mix perhaps. For the most part they serve the same purpose.
How useful folders are depends on how you like to prep and organize your tracks. Maybe it can be just a way to separate production audio and music from the voiceover. Or you might use them as buses for mixes with guitars, drums, keys and all that good stuff. Folders in reaper are a utility. How you use them and have success with them is totally up to you.

Reaper’s folder function is just another tool that enables you to setup your project so that it makes sense to you. It’s a tool. Learn one tool at a time when and if you have a need for it. With time, that toolbox will bee full of good stuff.

Okay, so how do I use that stuff?

Listen to the demo:

About tutorials on House of Imp:

Note that this demo is created on a Mac. But I will when needed explain the differences best as I can.

My reason for recording this specific demo is that
Despite their simplicity, folders can trip you up. And Plus, the thought of using folders can seem a bit daunting. I’m here to tell you they don’t bite.

Remember: Use F4 and F12 for the action list and shortcut help respectively. These keys are your friends.

A note on demos and tutorials: Some of my demos are created quickly because someone needed a demonstration quickly or an answer to a question while in a bit of a panic. This means that production and editing can be minimal or non-existent. It also means that they don’t go into depth and do not cover all options or related issues.

Listen to the demo:

For questions and demo requests, you can

If you love what I do and want to make sure i keep doing it, feel free to
Buy me a coffee!
Jenny K. Brennan

This song started as an instrumental  track on Kompoz by Bill Babcock with drums by Andrea Spaziale. The song was left untouched for a while. Until Rob Glass added bass. This is my mix and production with my somewhat unsolicited lyrics and vocals.

This mix will be up for live feedback on
Produce like a Pro with the following notes:
Update: After Bobby confirmed my feeling that the vocals were simply too overpowering, I pretty much worked them over completely and decided to thin down the synths to make room. I find it hard to balance these instruments and hesitate to use the mute button too much. However, since this was never meant to allow for vocals, I might be fighting a losing battle. I think I’m slowly getting to where I want it. I could spend even more endless hours on automation, but I might need a bit of distance to it first.
Mixed in Reaper.
Enjoy. And follow me on
SoundCloud, for more demos and mixes in progress.

JennyK
At the House of Imp Studio. 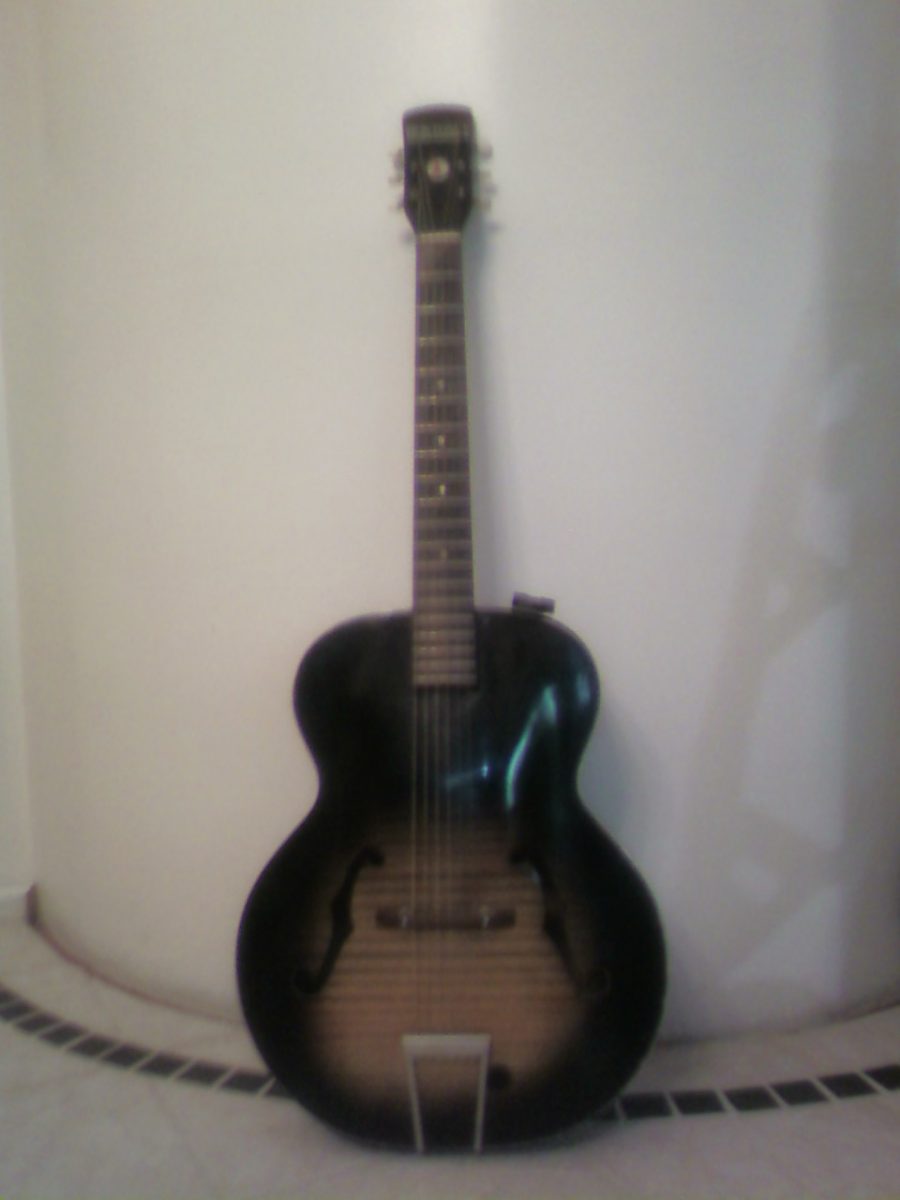 Tune that guitar by ear

I do not like tuning guitars. I dislike guitar tuners even more. They are rarely if ever created for blind people. so I tune the damn thing by ear using this very file. Thought I’d share. Have fun playing. This is for basic tuning of E A D G B E.


File generously created by OffTheWall a.k.a James.
Download Right click and choose save as if your browser is being stupid.

Boost 11 tip for the pedantic

Boost 11 is a really great sounding Master bus compressor / limiter that comes with Cakewalk sonar. I use it in most every mix. it is not too drastic, is easy to set, and is one of few plugins I couldn’t be without in my productions. Mostly on the final stereo out but also sometimes on a drum bus, pre stereo out, or as drum bus paralell compression. Try it some time. Be gentle with it, but the serial compression might just give you exactly the sound you want. But I digress.

It actually is not all that hard to use even out of the box. For a sighted user it’s most likely nothing at all to it. Just drag the sliders with the mouse and you are done. But that’s not really interesting if you can’t see the slider or whatever knob may be in the plugin dialog. What we will do here is use the inspector while using JSonar and Freedom Scientific Jaws to set the values. Those who changed over to NVDA and it’s Sonar application that is currently under development, can use the exact same method.

The problem with Boost11 and it’s parameters is the difficulty to set exact values. When using JSonar and HotSpotClicker the method is normally as follows:

Open the boost11 dialog. Hit Ctrl 1 to access the output slider and Ctrl 2 for the boost slider. These can then be adjusted in large increments using PgUp and PgDn, in small increments using the up and down arrows. Pushing left and right arrow keys when on one of those controls is supposed to speak the current value. This does not always happen. Depending on the version of HotSpotClicker and JSonar used, the behaviour can be even stranger. In my own setup for example, once a value is changed a virtual mouse-click using numpad slash reads the value. After this the Boost 11 window has lost focus and I must Alt tab back to it.

After setting the desired value; Shift plus Alt plus P is supposed to activate the preset edit box. Once focused there, type a preset name, tab to the save button and hit enter. This sometimes actually works. This is by the way the way presets are saved in most of Sonar’s plugin windows.

Tip: If focus does not go to the edit box and you get a message about hotspot failed, no panic. Do this: Use the Jaws cursor, navigate to the preset edit box and double click it. Now you can type a new preset name and save it.

I’ve started to really get annoyed with this and feel that the Boost11 dialog is simply way too unreliable. It seems to me that values i set sometimes do not stay where I set them. So i got tired of it. This is the system i use now.

Start the inspector for the track where the plugin has been inserted.

In the inspector display list; uncheck everything except the FX. That’s the easiest way. Specifically for this exercise you need to Set the inspector to display FX, set the module option FX item to show assignable controls.

Now we are ready. And since all projects need to have some type of goal, our goal will be to set the output value to -0.01. It’s as close to 0dB as we can get without it being there. So that is our goal. Let’s hit the numbers now.

One small increment i.e plus or minus keys on the numpad, in the inspector equals a 0.19dB change. One large increment i.e left and right bracket, equals a 0.80dB change. So just by following the numbers, this is what we can do:
When focused on the output field: Start at 0.0 and hit minus on the keypad. It will give the numbers as follows:
-0.19

(This is most likely as hot as i would ever want to go, but this is not about me. 😀
So we move on with the minus key:

For those wondering: can’t you just type in the value?

The answer is that in many plugins it can be done. For some reason, Boost11 values cannot be edited in that way.
In any plugin that will allow this there is a rather annoying glitch though: When entering a text box, typing the value and hitting enter, the inspector disappears. Well, actually Jaws loses focus and the inspector needs to be turned off with the hotkey I, and then turned on again with hotkey I. When back in the inspector one needs to navigate back to desired field. Not a big big dieal, but it is annoying as hell.

You ask: But what about automation and midi controllers?
I say: Sure. but that’s not for this post. We want exact values. there can be various reasons why an exact value is needed. Not very often, but as far as a limiter goes, it can be very useful.

Hope this helps and have fun mixing.

Tutorial – A quick look at Sonar, JSonar, and the inspector

Updated!
For some reason the audio for this episode is gone. I never even noticed. That’s just so ME. LOL. However, the audio boo is still around. And that was after all the point of this post. So enjoy this Boo from the past.

Listen to it here: Jenny K Brennan AudioBoo, where I show how to set up the inspector in Sonar and just showing the basics on how to use the track equalizer and how to find plugin parameters.

Updated so it works just in time to be archived. 😀