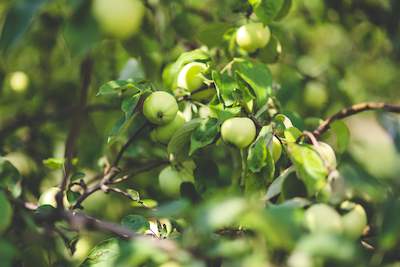 Here, an empty plastic bag neatly folded. There, a wooden bowl on a cardboard box.

Green apples. That’s what was in the bowl. She had wanted them once, had craved food, vitamins, minerals, the feeling of chewing; Crunching crisp apple into pulp, swallowing. All she swallowed now was her own saliva, when she had any, and the spark of hope that refused to go away. Mocking her with their moisture, their sweet meat within doomed skin, the apples made time pass. Like her, their time was short.

Here, a glittering drop of water. There, a speck of dust in unconcerned flight on invisible drafts, made evident by light from a spotlight attached to the wall above the bowl.

They hadn’t been there for very long those apples. They would start to dull and their perfect surface soften. Just like the other ones. Just like her. They would shrivel and dry. Would he bring a new her when she shriveled and dried, she wondered. She didn’t have to think about it; the question was supposedly moot, but confirmed each time she saw the fruit lose its luster and the waiting began, again. She could hardly remember anything else.

When the apples became too old, he brought fresh ones, always green, always perfect, beautiful apples. Soon he would come, would rinse five or six fresh apples in the sink in the corner. He would throw the retired fruit in a plastic bag and tie it up. He would arrange the new ones in the bowl and leave the room. He would take the garbage with him, close the door and lock it.

Each time, He left her alone to watch the apples. “Time for contemplation and reflection,” he said once. “We want always what we cannot have.” He had said in a low voice in that peculiar accent; He didn’t come from around here, or, maybe she wasn’t where she had been before, hard to tell. After arranging the fruit and inspecting her bonds, he left her alone for an hour, sometimes two, whistling as he walked off to someplace other. Some place she would never see.

The needles with their attached hoses feeding her from bags of fluids kept her alive. The weekly cleaning kept her from smelling too bad, and the daily shifting of position kept her more or less free from sores. The hard plastic around wrists and ankles kept her in place on the narrow bed with its thin mattress, flat pillow, and sheets smelling of lavender. She couldn’t smell that anymore though.

How long had it been? In the beginning she had kept track of the time; that was after she had stopped fighting. How long did it take for apples to go wrinkly? Two days? A week? At one time she had calculated that if it took three days for apples to wrinkle enough for him to feel the need to replace them, and the apples had been replaced… Ten times? Twenty? Numbers meant nothing. Once she thought keeping track of when feeding bags changed would work better, but they were always replaced when she slept. Sometimes she didn’t even notice so she stopped counting.

Her shrinking body ached, skin burned, her eyes felt hollow and misty. She had long since given up on pulling at the things holding her naked form down, but still she raised one hand. She gained a few lousy centimeters; enough to scrape the side of diminishing thighs, no more. She tried to pull her legs up to bend her knees, knowing it was useless. The give in the restraints was the same as always: None. She was too weak to struggle and after a few moments, she let herself fall limp. A plastic bag hanging on the side of the bed needed changing. How was that possible? She wasn’t allowed to drink; everything was given to her through the hoses from the bags. What little generated by fluids dripping into her body couldn’t have filled the catheter bag that fast. How long had it been? When would he come?

Sharp burning pain between her legs raised her from numb rest, but the smell woke her all the way. Cringing and squirming slightly from the burning,it still felt better. A constantly irritating pressure had fallen away. Slowly turning her head, she struggled to focus, saw a dark yellow splatter on the floor next to the bed, a thin hose trailing through the urine to a bag broken open. Piss bags don’t break. Someone had said that once. She couldn’t remember who. She looked up to the coma bags; there were two of them. Both bags were nearly empty; Maybe a cupful in one, half a cup in the other. He had never left them that long. Would he come soon?

Here, a buzzing fly circling without aim. There, a realization of something different. Here, a lightheaded hoarse laughter. There, a wooden bowl filled with wrinkled apples.

She looked at them, mildly fascinated by the deepening wrinkles. She never knew how small apples could become when they dried. They were probably still edible; Ugly spots had appeared on a few of them, but that didn’t matter. She didn’t eat apples. She stretched her clouded vision toward the transparent bags; both of them flat and empty. She smiled a little. He would come soon, with fresh apples, and this time he would surely bring a new her. That would be nice.

Allen Kincaid, the man in custody for abducting twenty-year old Nina Henderson from her home in Smith’s Falls Ontario more than three months ago, was found dead in his cell this morning. According to his lawyer, Kincaid had finally been ready to reveal the location of Ms. Henderson to police in exchange for…”