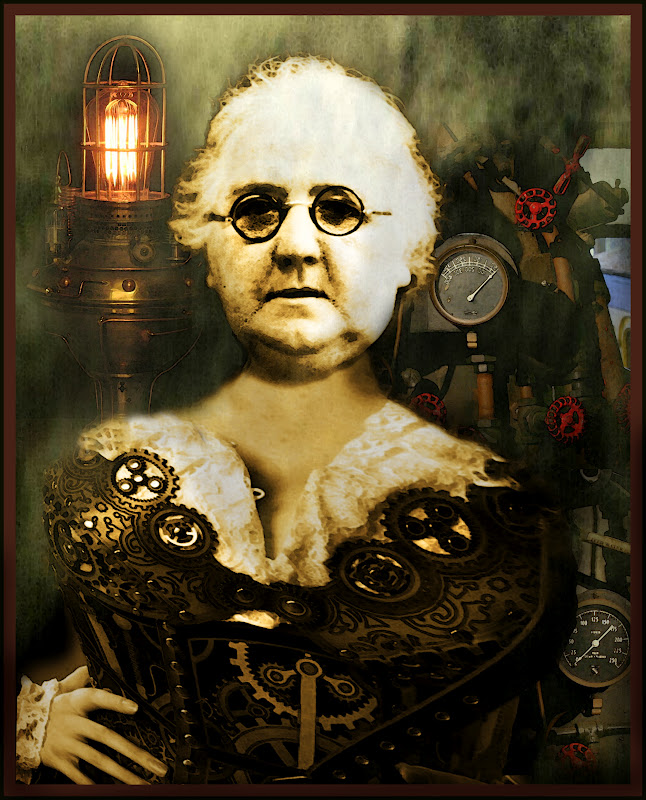 Excerpt from A Mothers Heart, This Sundered World – Book 1

“Oh no you don’t. I can’t. Shit, spit god fuck. Shit you don’t do this to me. Oh no, not to Gabriel. Not fucking fair… not fair. Not fair.” The rant exhausted itself in a moan and a sudden hiccup. The outburst of frustration and fear morphed into wordless mumbling. The sounds didn’t even seem his own anymore. Gabriel kept making sounds to stop thoughts about what he was doing from crushing him. Because Gabriel had no fucking clue. He didn’t know. He had never known. So he kept sputtering garbage because it might, on some level, help. Gabriel’s fingers worked quickly but clearly at random where they had never been meant to be working. They prodded and poked at the intricate machinery. Turning one small knob, flipping one switch, prodding desperately at the bundles of wires and pipes grafted into flesh.
He stared intently into the clockwork and willed it to keep going. Each desperate searching touch seared his fingertips as the overheating little engine spewed intermittent bursts of steam. Each leak decreased the pressure in the tiny engine he was trying to get going again. He had to get it right and do it before it failed. It had to be repaired while still running as it would never be restarted. That was the only thought in Gabriel’s head as he scanned the incomprehensible clockwork that was his mothers failing heart.

A ragged cough stilled his fingers and he looked up at his mothers face. Her pale lips were turning a shade of blue that Gabriel had never seen before. He stared at his mothers trembling mouth while avoiding her eyes. A dry tongue prodded outwards from between perfectly manufactured teeth fronting the darkness of her mouth. It waggled weakly in a futile attempt to moisten dry and cracked lips. He stared as another cough racked all of her and a dribble of dark blood joined the already gore spattered chin and neck. Too much pressure will do that to a person, he thought numbly. Failing fucking machines will do that.

The woman on the table drew in breath and smiled weakly. “Mind your words, Son.” Her voice was barely loud enough to make out over the hissing steam and gurgling from her chest. It was no more than whispers of leaves, crackling and buzzing of insects dying. Not the intense fight for survival but the feeble twitching lingering remnant of the same. Accompanied by irregular clicks and incorrectly modulated functions, her words rested in the air between them for a moment before they registered as actual words. The meaning became clear several long moments after that. She slowly shook her head and laughed a rasping huff, wobbled a frail shuddering chuckle, “Gabriel, you idiot. Get your hands off my tits.”

Gabriel blinked in confusion at the unfamiliar words but did look at his hands. And true enough, one of his hands had slid out of the cavity in his mother’s chest and rested on one of her withered sagging breasts. A desperate sound emerged from his chest. It might have been a laugh. It might have been a cry. It was both. How could he feel embarrassed in a time like this? Mother was dying and Gabriel was trying to mend her breaking heart. However, long habit told him he should be feeling shame and so he did. Something that had built up inside him ever since he had found his mother in the state she was in now, wanted to burst out in the open. It felt hot and acidic in his chest, but moved about frail and thin in his mind. He closed his eyes and willed it to stop; that thing that he didn’t want to feel.

He mumbled, “Sorry Mother.” and pulled his hand away from the unseemly touch.
Mother raised her hand and placed it on top of his where it trembled against the blood spattered crumpled fabric that had been her dress. A splayed open corset and neatly unbuttoned shift completed her outfit. She breathed. For the time being she breathed. But he knew it would soon stop. She strained to speak but speak she did. “Don’t worry, silly one. I didn’t expect you to fix me. But you just ruined your vest. You can’t go out like that.” A disapproving wrinkle appeared and disappeared. “Your gloves. Did you lose your gloves again Gabriel?”

Gabriel jerked his head and stared into her eyes. Her hand was cool and sticky on top of his. It was so still. Calm where his trembled. He wanted to say something. That he didn’t understand. That of course he would. That of course he hadn’t lost his… what the hell? What did his gloves have to do with anything? He would mend her up just right. He could fix things. His face burned from the obvious lie even though it hadn’t actually been spoken.

“It can’t be fixed.” she appeared to regain a sliver of energy and she kept talking as her failing clockwork heart kept loosing power, “One too many bad parts got put in to that heart of mine.” She rested for a moment and in the silence her body produced one labored breath, and one heavy unsettling clunk from her chest. Just another part grinding to a halt. She ignored it and breathed again. “I taught you what you need to know. You idiot son of a true bastard. Dead River is not for you.”

Gabriel looked away uneasily at the face that came foggily to his mind. His father had been recycled for so long that the memory barely stirred anything in him anymore. The remade cripple had been Gabriel’s first, and last, lesson in Body work. He hadn’t known what that meant then and he didn’t know now. A machine like any others he had thought. Machines made things happen. Machines wheezed, sputtered, mumbled, transported heavy things from one place to another, worn down, ticked, gurgled, and broke. But what that machine had done with his father after Gabriel hoisted the limp stiff body into the hopper had been something Gabriel hadn’t known machines could do. The machine broke people. Broke them into parts. Some bits to reuse, other bits to process into fertilizer, and some bits to place in glass bowls to look at. He had never figured that one out.

Mother noticed the familiar bemusement and sighed. As much as her ruined apparatus could express exasperation, it did. Two surprisingly powerful fingers pinched Gabriel’s hand and he immediately jumped to attention. Mother was talking. “I wonder…. I wonder if I taught you the wrong thing. You know, stupid child that you are.” She paused as she contemplated words that she should have used a long time ago. She wondered if there was any meaning to telling this boy. This creature … This child. “Listen, you idiot. I know you can’t do shit. You are no repairman.” She drew shallow breaths and seemed to want to say more. So much more. But after some moments, she slowly shook her head and closed her eyes. Gabriel’s own natural heart skipped a beat but his mother was still breathing, just gathering strength.

Finally she said, “I have been remade, repaired adjusted, prodded on for the last time. You hear me? There is nothing you can do Son. Even if you had the…” She coughed up another glob of bits of her mixed with gelatinous slime and blood, grimacing at the taste of her own fluids. “Go.” She said, shaking her head as if that could banish the things she would have said if there was time. She turned her head away and the world seemed to fall in on itself as Gabriel realized he could no longer hear the hiss of breathing. There was a whistle of steam escaping but no human apparatus ever made that sound. Cooling pipes ticked. Cogs slowed, blood no longer had power to move. With just a whiff of air that barely moved vocal chords, Mother spoke so softly that Gabriel had to put his ear next to her mouth to make out what she said. In the stillness he heard it though.

“Go. Away from Dead River. Get out of Crawdin Lands. There is more out there. Outside. More…” Her body shuddered before she told him what she had kept from him for so long, “more people. Find them. I was afraid to see. I was… was wrong.”

The hand that rested on Gabriel’s twitched violently, turned into a grasping claw for a long second, and then grew still along with the rest of her body. Gabriel stared at the failed machinery, the failed body. He was hoping for just one more sound from her. Just a few more words to explain what he had just heard her say. But he was not that dim. He knew she was dead. She should go in the hopper. That’s what he should be doing; recycle her body and all the extra parts that were her. But if… The thought came slowly through resistant patterns of being. Patterns shattered by his mother’s last words. “More people.”

More people. Gabriel spoke the words out loud. Tentatively at first and then louder, “More people?” The air fell quiet and somehow suffocating around him. He felt suddenly calm. He was cold and calm, and to his own surprise not just a little bit angry even if he couldn’t quite point that anger at anything in particular. There was too much to rage at. But there was also so much to revel at. “Outside. More people. Find them.” He used the words as anchors to hold his inner world in check and away from grief.

Clarity came to the young man. It stepped in and stomped all over Gabriel’s mind with brutal knowledge that he couldn’t take in and understand in a hundred years and a million lessons from mother. There was too much. From the overwhelming influx of never thought before ideas and revelations, Gabriel distilled two distinct facts.

Secondly, mother had lied to him. Meaning that they had not at all been alone as she had said. There were others. What others? Had she known them? Who? Where? Why?

Gabriel pulled his hand away from Mothers body and turned from it. He stood motionless and simply listened without hearing what he should have heard from the start. But what he didn’t hear didn’t matter at that moment; instead he was absorbed by another feeling that was so odd he had to grab hold of the edge of the steel table for stability. He felt the world speed up and expand away from him. He sensed his own place within it change. Gabriel shifted from the centre to the insignificant edge. From just the one part to one part of many. Then the world around him rushed back to settle in its new unknown configuration. Gabriel stared at some spot of nothing some place just ahead of him and finally shook his head and blinked furiously. After a moment of that, he started scraping gore and drying blood off his fingers, grimaced, and pulled his newly realized self back to the centre of the universe. He grew taller and the rest of the world came closer. All he had to do was to go get it. Go. Mother had said “Go.”

“This Sundered world has no release date. It is being written along side the prog metal album with the same name.

The words telling the events in this wholly fictional story were conjured and transmitted via fingertips, through computer keyboard, and subsequently into digital storage by Jenny K Brennan. All rights reserved.